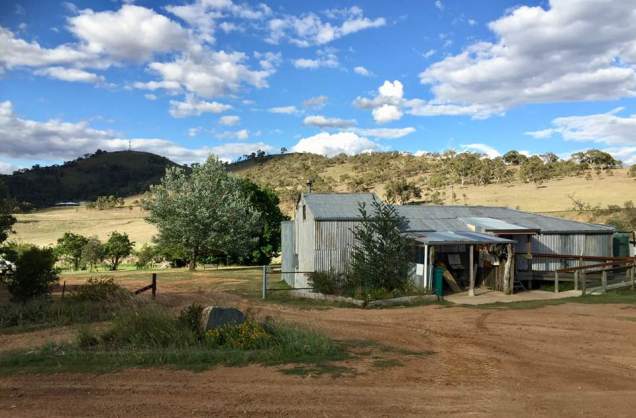 Last week we spent a few days at a Bush Heritage Australia conservation property, Scottsdale Reserve, which is located approximately 70-kilometres south of Canberra on the Monaro Highway.

And the weather was much warmer than the last time Baz was there in August when temperatures plummeted to minus 10 degrees.  This time around the days were warm and the nights balmy…

Our assigned task was weed control, spraying fields of St John’s Wort that are now starting to flower. However, sporadic rain showers slowed this job down.

Mind you rain is most welcome on Scottsdale as it has been in drought for sometime.

So while Baz was out in the Polaris spraying weeds, I got to have a Master-class in propagating two types of Eucalyptus trees (Eucalyptus Bridge Siana and forgot the other one…oops)!

The propagation process entails looking under a microscope to see how many seeds are mixed in with the chaff, which in turn determines how big a scoop of seeds/chaff go into the potting tray.

I had no idea the seeds would be that microscopic, so it was a very small scoop…!

Late in the day, just around dusk, we made our way to a beautiful spot on the Murrumbidgee River, which the property fronts, to see if we could spot a Platypus, or two, but to no avail on this occasion, they didn’t want to come out and play. But we saw turtles, water rats and some big Murray Cod!

A great and fun time to spend a few days helping out the environment!

And hey, you can read some more about the work Bush Heritage Australia does, here.

“Achievement leads nowhere; makes no difference at all…

Just be happy now, release your struggle, let go of your mind, throw away your concerns and relax into the world.

No need to resist life, open your eyes and see that you are far more than you think,

You are already free…!”

I’ve been reflecting on this statement as I head to North Queensland, especially given there has been some endless driving following the white line on the bitumen road, affording plenty of “thinking time”.

And yes, for sure, I will get off the bitumen eventually and back out into the bush, the outback and some “red dusty roads”.

Mind you, it is quite pleasant travelling the coastal route and I’ve managed to spend time sitting back with a book gazing out across the water as I make my way towards Hinchinbrook Island for a few days of hiking, followed by a trip to Cape Melville, halfway up to the tip of Cape York. 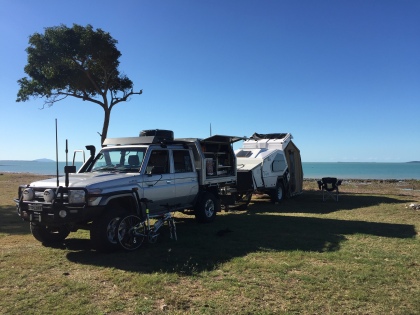 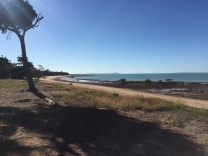 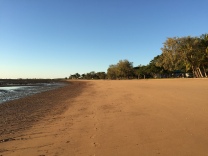 Back to that statement though…

As many will recall, I recently “graduated from work” having decided there was more to life than joining the traffic jam on my way to work, only to do the same thing some (too many) hours later to get home.

Did it truly make me happy?

Perhaps the security of a weekly pay-cheque provides an illusion of happiness, but now that I have let that go and started to focus on “living in the moment” I’ve discovered far greater riches than a financial outcome can ever provide.

Yep, I have concluded that there is far more to life than work…

And hey, let me tell you Janet-Planet and I will be putting the “more to life than work” theory to the test as much as we possibly can.

Perhaps some will disagree with the proposition achievement leads nowhere; makes no difference at all, but as we all take our last breathe in this lifetime, we’ll all be equal, what we’ve achieved will mean little at that point – but being happy to that last moment will be priceless.

Well, at least that is my take on it, but whatever your view, just be happy now – strewth, that is my motto these days…!

Photo: Baz – The Landy, on the beach at Clairview, Queensland.

Ps: Yes, the last you heard from me I was in England, but I am back travelling the country I love. And don’t be alarmed if you don’t hear from me from time-to-time, the beauty of where I am travelling to be is no communications!

The Australian Outback, an ancient land where the red-parched soil is touched by an endless blue sky and where confetti flutters on the breeze.

Hang-on, since when was confetti part of our outback landscape…?

You know, the ones you see down at the Historic Rocks precinct in Sydney on a Saturday morning.

Lots of smiling faces, nodding as only the Japanese can in their most polite way, married in large groups on the steps of Mrs Macquarie’s Chair overlooking the magnificent Sydney Harbour, and more confetti than you could poke-a-stick at.

Strewth, and just to be clear, lest I be accused of casting a racial slur…

I love the Japanese people.

What would lunchtime be without sashimi – Nikon camera’s weren’t the only thing they shared with the world.  And hey, I’m not suggesting there were busloads of them in the outback throwing confetti everywhere either.

But crikey – somebody must have been.

There was so much of it you could be forgiven for thinking that it must have come from a mass wedding.

Now I get it, it isn’t the most popular dinner party topic, but thanks to the hilarious 2006 movie “Kenny” we have at least got a little more comfortable discussing the issue around the camp fire these days.

And let’s not beat around the bush here, we are talking about “Poo Tickets”

Crikey, I thought everyone has watched that movie?

Oh, stop cringing and shuffling in your seat…

And spare us the protest, Kenny dispelled many of those urban myths about…

Mine doesn’t smell and I always clean the bowel…

As a kid I used to visit my grandmother’s home in a small country town and she had an outhouse down the backyard. Anyone from the bush will know what an outhouse is and without doubt they’ve been the butt of many jokes for time eternity.

In Nan’s outhouse there was always a small box of matches sitting behind the door and she insisted one be lit each and every time you arose from the throne!

I thought this was normal and I don’t recall anyone ever complaining about the need to do it, it was just part of the routine…

Although, Uncle Bluey did complain about it once, but that was when my cousin accidently set alight to his prized Playboy Mag he had tucked down the back of the seat that us kids never knew about.

And mum’s still the word on that one..!

So why a box of matches?

Needless to say, caution should always be exercised when playing with matches and there was the time Bluey sent the outhouse door over the back fence after a brekkie of Heinz baked beans…(thank God for flushing toilet’s these days, hey)

I’m not sure what was funniest, Bluey sitting there in his navy singlet with his Y-Fronts around his ankles, or the dunny door in the neighbour’s mango tree.

He had that “eyes rolled-up, embarrassed” look that dogs get when your eyes meet as they do their business.

Dog owners will know what I mean…

But, here is the thing, we’ve always carried a little box of redheads when we are Out and About.

In one bold strike you fill the air with the smell of a freshly burning match after a squat, removing the need to protest yours doesn’t smell, and importantly, you can use it to burn your poo tickets…

So, for those of you that head bush please take “Miss Redhead” with you.

She may not ignite your passion, but in the least, she will put a flame to your “poo tickets” and spare our wonderful country the indignity of the unwanted and unsightly “confetti” that has increasingly become part of the landscape…

Ps: Seriously, this is a major problem these days!

Hey, just a week or so ago I hung-up my business suit following a “graduation from work”.

And one of the reasons for doing so was that work was just getting in the way of having fun and adventure – something had to give, right?

Anyway, I caught up with a fellow adventurer at the weekend, as it happens, my brother-in-law the Kiwi, and after some kayaking around the beautiful Newcastle coastline and over a couple of beers he tossed out the line…

“So what are you doing now that you have retired graduated from work…?”

“Well, it’s only been less than a week, but I am working on some ideas”…I said, twisting the top off another brown bottle.

“I’ve got a great idea for an adventure just suited to you retired blokes on a shoestring budget…” he said, barely containing a wry smile..

It’s a familiar line I’ve heard many times before and usually pitched after the third beer. And like accepting the “King’s Shilling” taking the fourth beer signifies you’ve signed up for some kind of adventure.

“Okay, Baz I’ve got a bush hike in mind, the Great North Walk, we’ll start the walk early next week so get your pack ready”…

“Can’t I just think about it”  I suggested trying to conceal we were on our fourth beer.

It could have been worse, I guess. 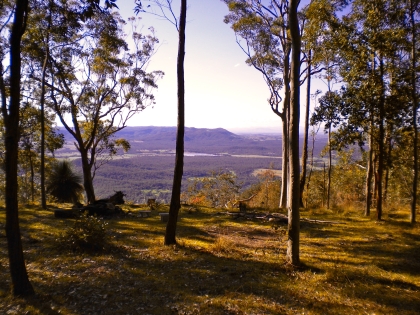 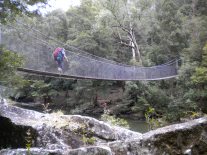 Not that it is an ordeal, after all this is a walk that is quite familiar to me and I have walked it in the opposite direction, coincidently, with the Kiwi, and have spent a lot of time on sections of it over the years…

It is worth knowing, just in case you ever have an inclination to walk from Newcastle to Sydney, it is 240-kilometres in distance over rugged mountain terrain; the road trip is no more than 140-kilometres on the freeway; and the price of a one-way rail ticket is $18 for a journey that takes approximately two hours…

…Yes, I’m hearing you Janet-Planet, you’re right, that fourth beer is always forged in blood, sweat, and usually some tears – I should have heeded your advice and stopped at the third!

Mind you, The Great North Walk is a spectacular way to get between these two harbour cities and worth highlighting it was constructed as a celebration of Australia’s Bicentenary in 1988…

There’ll be no luxury, just a simple bivvy bag under a tarp as we progress south towards our destination, Sydney’s Circular Quay where there is an Obelisk that marks the finish.

Coincidently, the Obelisk is right next to a well known Sydney watering hole, the Customs House. We might even have a beer there in amongst “The Suits” to celebrate the end of this adventure… 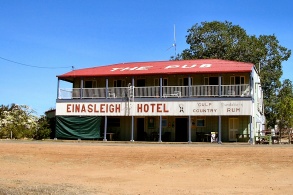 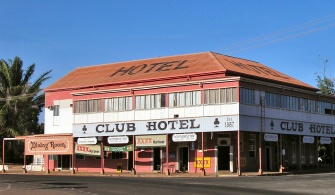 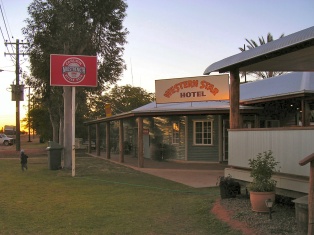 Keep the fluids up…

Okay, yes Janet-Planet, I will put up the disclaimer

Photos: Baz – The Landy, and Janet-Planet, Out and About toasting Australia!

An egg poached in an orange over a coal fire with bacon on the side. Seriously, it’s gotta be the best thing since sliced bread, hey!