Nestled in the warm tropical waters of the Coral Sea, the Keppel Island Group provides a scenic and panoramic backdrop to Bluff Point, where green turtles can be viewed swimming placidly along the rugged Capricorn Coast… 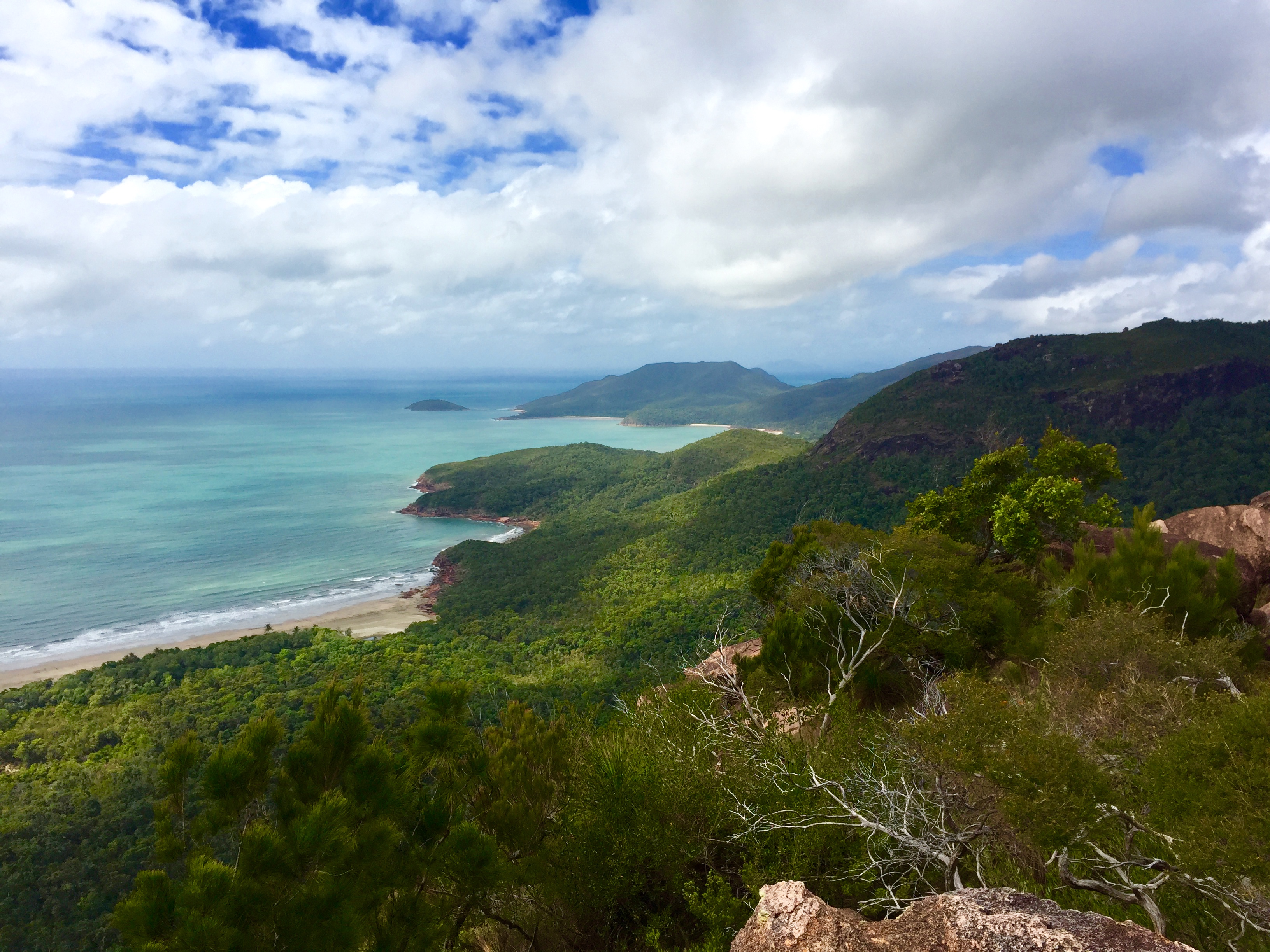 Wonderfully mysterious is perhaps an odd way to describe Hinchinbrook, but as a kid growing up in the region I always remember thinking of it in this way as we stopped at the local ‘pie cart’ on the foreshore. A delightful feature of Cardwell that I am pleased to say is still the case today.

Across the water, the island’s tall peaks stand proudly, densely covered in tropical rainforest and often shrouded in cloud, giving it a mysterious look. A somewhat enticing look that always excited me as a place made of a ‘boy’s own adventure’ and I daydreamed of what I would find as I devoured my pie.  And if I was lucky, another.

They say it is never too late and as I stood on the Cardwell Esplanade this week, eating a pie from the pie-man, I looked out across the Hinchinbrook Passage to that mysterious island with the eyes of a young boy. Excited no less than I was all those years ago I contemplated the walk along the Thorsborne Trail on the eastern seaboard of the island that I was about to embark on. 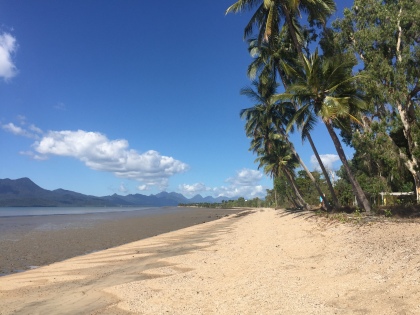 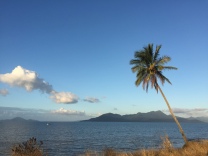 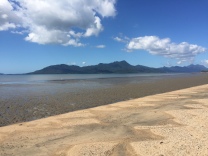 Would I find my boy’s own adventure?

Whilst I am a frequent hiker in the bush and mountains it has been a while since I last strapped on my hiking pack and my fitness levels were showing it, especially after just spending a month in Scotland and England enjoying cream teas and the odd one, or too many, pints of bitter, despite it being warm. Both the beer and the weather!

It is fair to say the waist strap was slightly more extended than usual, but a few days hiking would go some way to sorting that out… 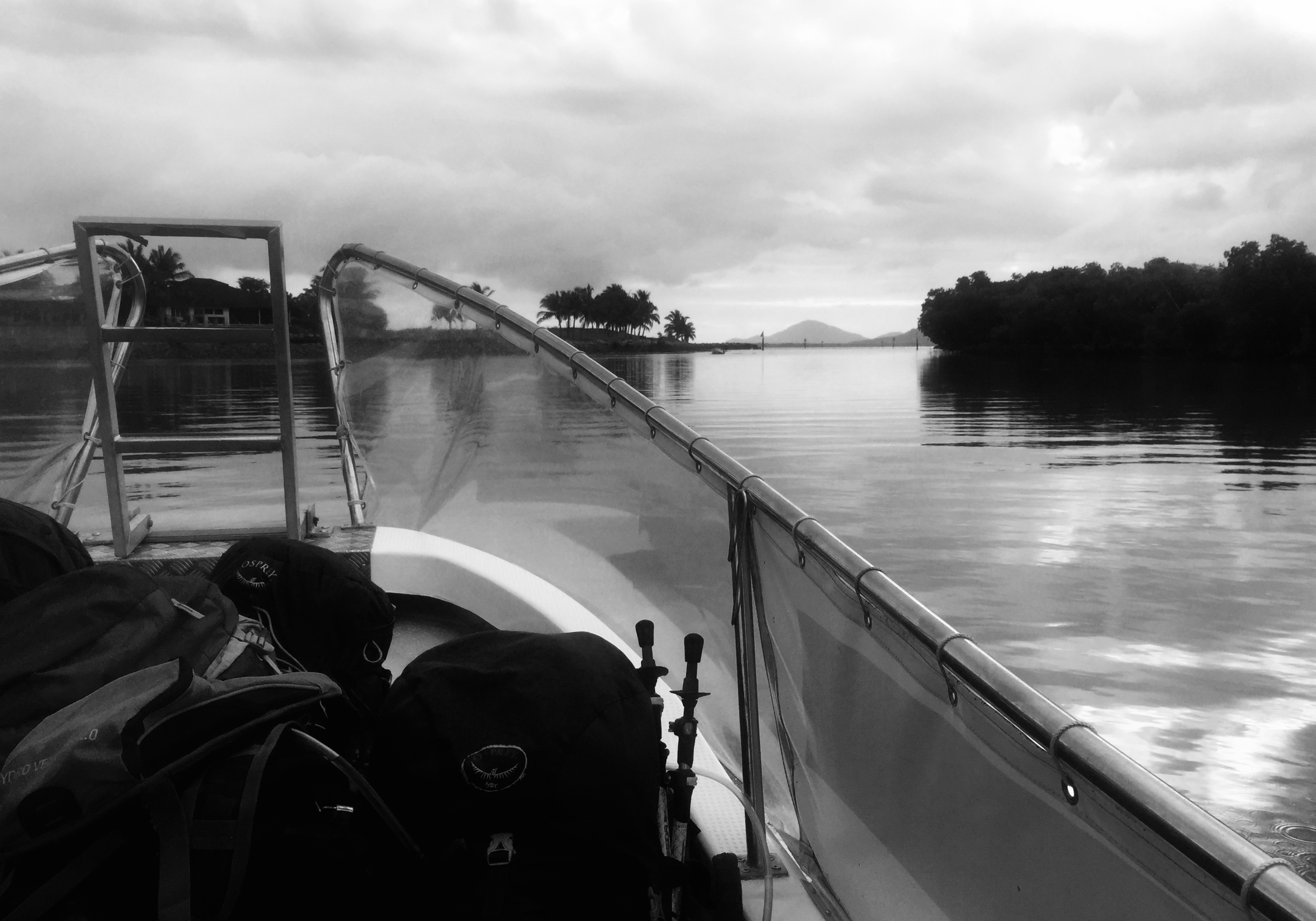 Eagerly, I boarded a small boat that would ferry myself and some other hikers to the island. And under overcast skies we headed towards our drop-off point at Ramsay Bay, situated on the northern part of the island, but not quite at the tip.

We were hopeful of seeing a dugong, sea calf as they are frequently described as we made our way across the shallow passage. Over the past couple of years they have been returning to the area in growing numbers as their natural habitat and food source recovers following the devastating destruction Cyclone Yasi caused in 2011.

Unfortunately, we would not be so lucky to make a sighting on this day.

It is a pleasant boat ride and the skipper, Dean, was keen to point out many of the different landmarks and islands in the area, but before long I was strapping on my pack and walking south on this fantastic adventure.

A comfortable hiking time is four-days and three nights, with camps set at distances sufficient to challenge, but with plenty of time to enjoy the scenery.

My first day was spent hiking from Ramsay Bay, through Nina Bay and an overnight camp at Little Ramsay Bay, which is nestled in the rainforest just behind the beach next to a small lagoon. Before passing Nina Bay I climbed to the top of Nina Peak, a must-do for any visitor to the island. Sitting at the top you get a great sense of the magnitude of the island and a better glimpse of those mountaintops shrouded in cloud and mist. 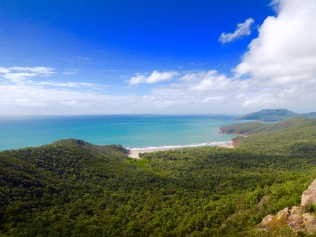 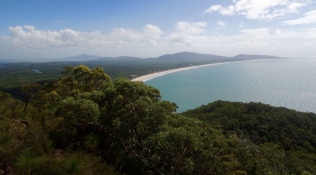 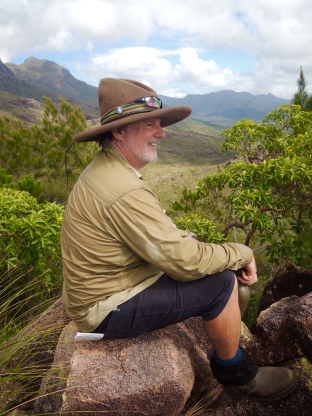 For this hike I decided to travel light and used a simple bivvy bag and lightweight tarp to shelter from the elements, especially the sandflies that inhabit the island. Whilst a small insect it shows no discrimination in its choice of victim.

The ‘Hinchinbrook Hilton’ as I called my sleeping arrangements served me well and did the job perfectly. 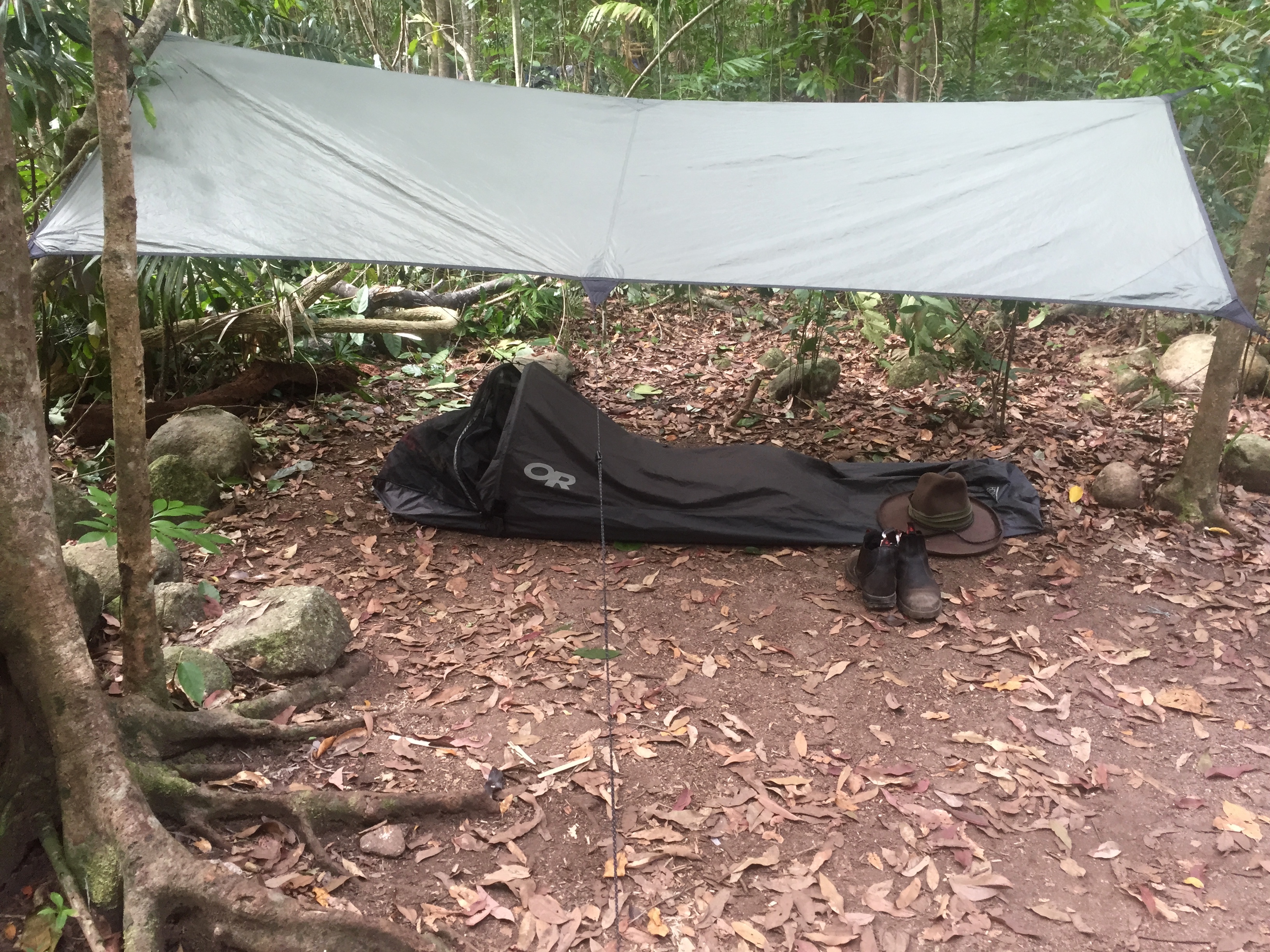 I also kept meals simple, as I usually do on these types of hikes, dining on a ration of French onion soup and beef jerky, supplemented with dried apricots and mango, and a favourite hiking delicacy of mine, smoked hickory almonds.

There was little risk of me starving and besides I had built up a decent layer of body fat after a few months of inactivity, much like a bear about to go into hibernation!

Water was generally accessible throughout the hike and whilst carrying water-purifying tablets I didn’t feel the need to use them all the time, but assessed it depending where I was getting the water. And hey, it is nice to get some fresh, unadulterated drinking water from streams whose origins are in the mountains. 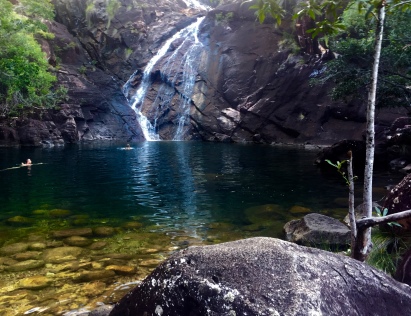 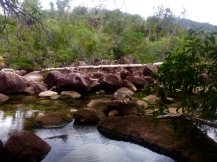 And of course, speaking of water it is sensible to keep in mind that this is crocodile country and they are known to inhabit the island, something I was extremely conscious of as I heard the water lapping onto the beach not far from the ‘Hinchinbrook Hilton’ on my second night at Zoe Bay.

Departure from my first night’s camp on day two was delayed slightly as the National Parks Rangers’ had closed the track between Little Ramsay Bay and Zoe Bay the previous day due a ‘cool burn’ they were conducting of undergrowth nearby to the walking track. I was aware of this in the week leading up to the hike and after they did a quick reconnaissance of the area they reopened the track mid-morning as planned.

The burn had little impact on the walk from Little Ramsay Bay to Zoe Bay.

Leaving Little Ramsay I had to do some rock hopping around the southern end of the beach leading to another beach around the headland before heading into the bush. The track takes you through a number of vegetation types, including dry open forest, rainforest and mangrove swamps and many creek crossings. At times of heavy rain the swamplands and creek crossings would become more challenging.

Continuing south towards Zoe Bay my path took me through a number of palm swamps in tall rainforest between North Zoe Creek and Fan Palm Creek, an area I was able to view earlier on one of the many headlands that I had ascended. 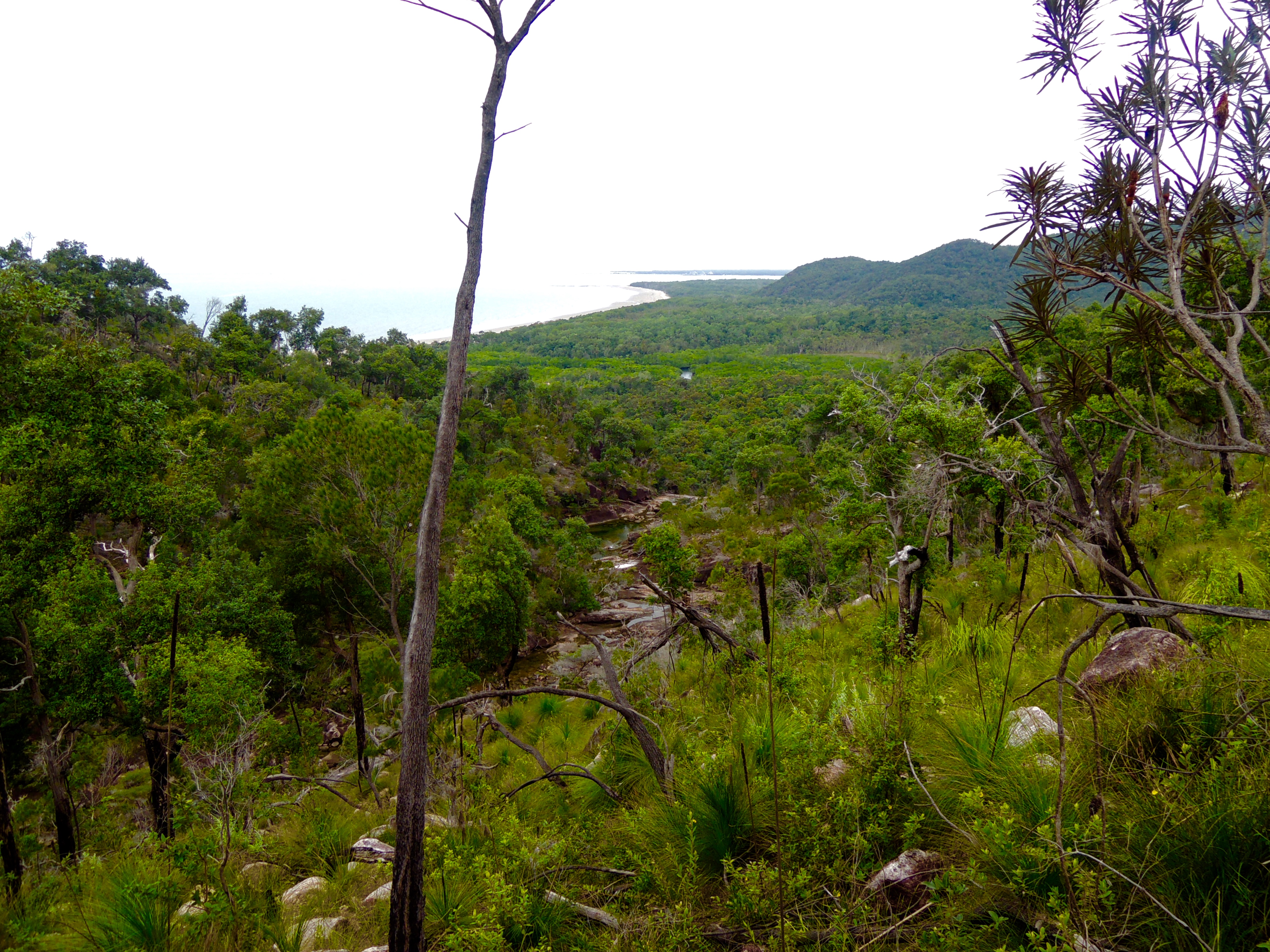 Eventually I found myself on the sands at Zoe Beach and I made way towards the camp situated near the mouth of South Zoe Creek. And let me say, the creek looked inviting, but there were plenty of ‘croc’ warning signs to indicate swimming here would be a mugs game. Mind you, it was only a short walk up the creek to Zoe Falls, where I enjoyed a refreshing couple of hours swimming in the pristine waters…

I shared the night here with a number of other hiker’s enjoying a meal and the camaraderie that is forged from a common interest. And a feature of these campsites is the metal boxes provided for food storage. The island has a large population of native rats and they are known to chew through your backpack to get to your food supply!

The smoke haze from the burn-off provided a spectacular sunset that evening and an equally spectacular sunrise the next morning. And whilst the ‘Hinchinbrook Hilton’ was serving me well, its size provides an incentive to get up and stretch the body early enough to witness sunrise, the start of another day in paradise…! 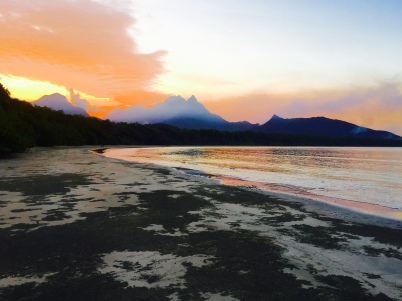 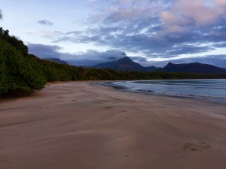 My third day of hiking started with a heart-pumping climb up behind Zoe Falls and on to some granite slabs above the falls where you get spectacular views of Zoe Bay. And a note to self, next time fill the water containers at the top of the falls rather than at the bottom!

After crossing numerous creeks on the ascent towards the trail’s highest point, which is 260 metres, I was rewarded with great views of the Palm Island Group of islands to the south. I have always marvelled at this island group sparkling in the Coral Sea.

Traversing a variety of terrain I eventually descended to Diamantina Creek where I sat back amongst the trees and listened to the calls of the many species of birds present on the island.

Crossing this creek needs to be done with care as the rocks and boulders can be slippery when wet, and if the water is high and running you would be wise to wait until it subsides. But with the water low I was across and only a short walk to my last camp on the island at Mulligan Falls.

I wasted little time in setting up the ‘Hinchinbrook Hilton’ in this rainforest setting before making a beeline for the refreshing waters of the falls. This is a beautiful spot to relax and with an early arrival at camp I made the most of it. 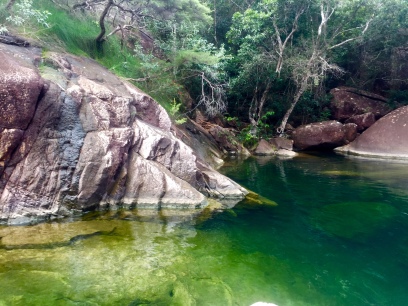 There is a restricted area above the falls where you are not permitted to enter due to the slippery nature of the boulders and rock pavements and deaths and serious injuries have occurred here. So it is wise to heed the advice.

But as I relaxed against a rock perfectly molded to the shape of my back I dozed in the warmth as my body tingled from the crystal clear water that washed away the sweat and grime of the day’s hike.  The only thing missing was a ‘Margarita’ to refresh the soul…!

And a word of warning, if there is one thing you don’t want to forget when visiting Hinchinbrook Island is some form of insect repellant, especially when camping in the midst of the rainforest. This was no more apparent than at Mulligan Falls.

The dawn was welcoming and whilst my sleep was restful when it came, at other times it was punctuated by the sounds of a ‘million mozzies’ serenading me and all wanting a piece of my flesh.

Such is life in the food chain, I guess…

The pick-up point for my boat ride back to Cardwell was at George Point and was timed to coincide with low tide to assist with the crossing of Mulligan Creek.

Situated on the southern tip of the island George Point overlooks the port of Lucinda and the extremely long jetty that transports sugar grown locally to cargo vessels.

Much of the morning’s walk was along the beach at Mulligan Bay and it was with just a touch of trepidation that I crossed Mulligan Creek where it opened to the sea. And not before I walked upstream for a 100 metres, or so, to see if there were any telltale crocodile slide marks on the banks… 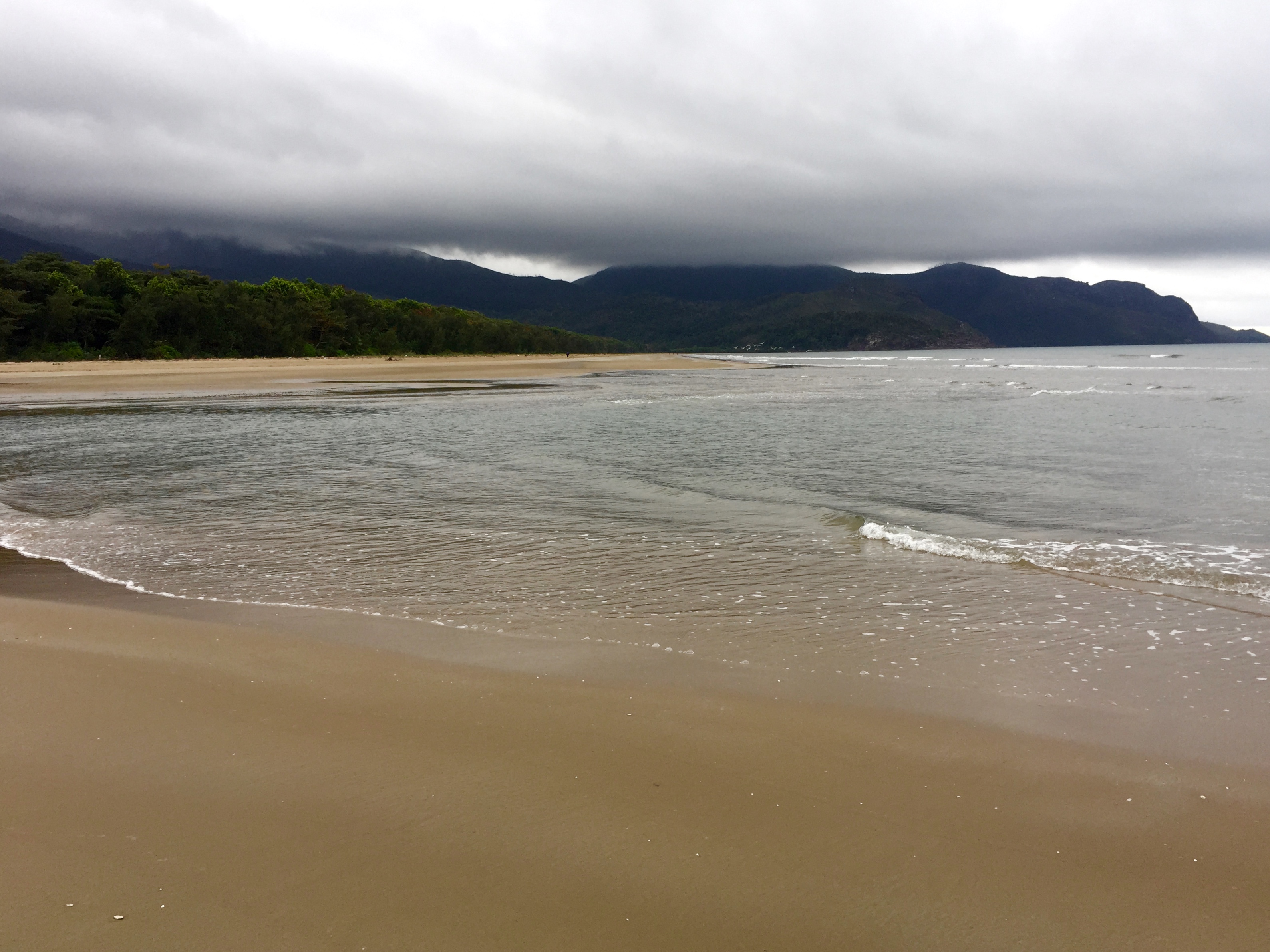 Fortunately for me the only ‘crocs’ present where the ones I was wearing on my feet. Not long after I crossed the creek I found myself humming the tune ‘Never Smile at a Crocodile’ which made me laugh at myself. Amusement can be very simple, all that is needed is a good sense of imagination, hey! 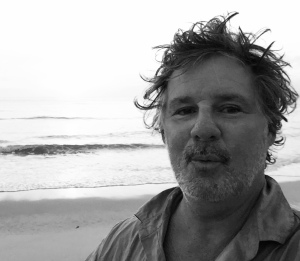 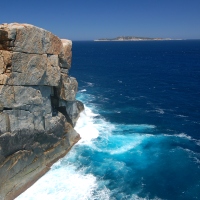 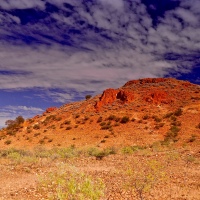 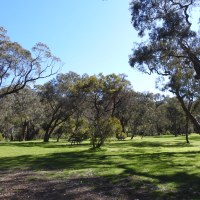 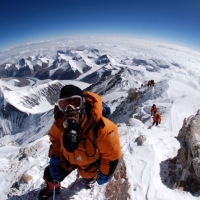 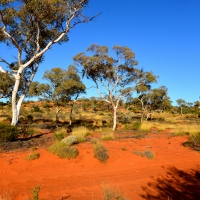