You’ve got to love the Aussie Shed, a beacon in a sea of green grass that is usually found near the back fence on any Australian suburban house block. I love my shed and even though it was designed to house a couple of cars, and all that stuff that you accumulate over the years, you know, the Christmas presents that you couldn’t stand but didn’t have the heart to send to the refuse tip, they all invariably end up hidden away in a dark corner of the shed.

As a long-term fitness junkie, my shed houses surfboards, kayaks, a Concept C2 rower, and my weight-lifting racks and associated equipment, as well as numerous bikes collected over the years. Not surprisingly there is a small collection of old Landrover parts and camping equipment. And yes, the odd Christmas present that seemed like a good idea to someone long-ago.

Mind you, not all Aussie sheds house exercise equipment, unless of course you count the bar fridge in the corner which is standard equipment. Often you’ll see the men-folk doing some elbow bending as they drink a toast to the day passed, usually just around the time the sun is going down over the yard-arm. And like a bunch of Cockatoos, high on the fermenting nectar of fruit consumed under a hot Aussie sun, the squawking tends to increase as the amber fluid flows.  And you can be sure a fair amount of advice is passed around, an exchange of ideas, thoughts, happenings, and the odd joke or two. A  bit like Speakers Corner where everyone is given a chance to say their bit, to tell their yarn in a not too serious way.

But I’m digressing…Each morning around 4.30am, or silly-o’clock as Janet, my partner suggests, I make the journey out the back door and up the driveway to the shed. Even the dogs, Milo and Jack, can’t be bothered to get out of their beds, preferring to wave me through, especially on these colder winter mornings. Although, usually after about 30 minutes or so one of them will wander up to see what is going on, but I suspect if they could speak they’d actually be asking for a feed, seemingly oblivious to anything else, such is a dog’s life. Depending on the day I’ll either pursue my strength training, or use the rower for my daily cardio fix and although I would prefer to be out on the water kayaking it isn’t always convenient during the week, so the rowing machine is a great substitute.

I must confess upfront to being an early morning person, I guess you’d have to be to manage a 4.30am start each day, but it does have its advantages. In between the clanging of weight plates being moved, or interval sets on the rower, I can stand outside in the pre-dawn silence and marvel at the stars in the sky, the wondrous universe with you at its centre, once a month watch a full moon setting in the western sky, and if I’m lucky even a shooting star to ponder a thought on.

And what of the neighbours I hear you ask, what if they don’t share my love of the early morning? I must say it is hard not to be tempted into playing some heavy metal, AC/DC or Led Zeppelin (okay I’m showing my age here!) to help the mood and give that much needed pump for the session. But alas, it is mostly done in silence, apart from a moan or groan under the weight of a squat bar, or the last 500 metres on the rower.  But fair to say, if I head up for an afternoon session, which is more often than not, it is always accompanied by some loud rock or heavy metal music. I’ve always said that Theo, our next door neighbour, is a closet heavy metal fan, so the relationship has never been strained, he doesn’t always say much mind you, but smiles a lot, so maybe he’s actually deaf. And I’m frequently visited by Janet, and TomO, our son, during these sessions, which is always welcome, mind you there would never be any chance of that happening in the morning, in fact I don’t think they know what 4.30am actually looks like.

There was a suggestion not too long ago that maybe the shed could be converted and upgraded to have a loft, an upstairs area where TomO and his mates could hang out, maybe even move into as he advances in his teenage years. You know, a brand new building without the cracks that have accumulated over the years, possibly from too much heavy metal music resonating through the walls, or perhaps just cracking up from the tall stories that have echoed from within – but it just wouldn’t be cricket, and besides where would I put the bar fridge?

No thanks, I like my shed just the way it is, and as the sun slowly sinks below the yard arm in a brilliant display of burnt orange…Cheers, from the shed! 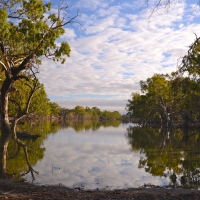